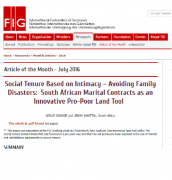 The Social Tenure Domain Model currently being developed by the Global Land Tool Network emphasizes the need to find innovative land tools that can function in a pro-poor way.  One such tool that has not previously been explored is the use of marital and cohabitation agreements to secure tenure. Private agreements can go beyond a legal arrangement between spouses to record and entrench diversified forms of land rights that protect third parties. It is possible to use such agreements to secure housing rights for the entire household, to agree succession of land, and to agree to alternative conflict resolution procedures. Such agreements can take cognizance of both formal and informal strategies used by the poor to secure tenure, rather than being narrowly focussed on formal regularisation processes alone.