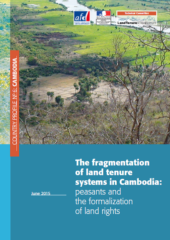 In Cambodia, land and natural resources occupy a central place in the production systems of peasants who represent about 80 percent of the country’s population. The development and governance of socio-ecological systems trigger considerable economic, social and environmental issues that need to be addressed urgently given the profound nature of the transformations at play in these systems across Cambodia.

Against the background of Cambodian peasant conceptions of, and approaches towards, land tenure security, this document presents the historical evolution of, and current challenges presented by, various land reforms that have attempted to formalize the land property rights system in the Kingdom. It suggests that current land tenure regimes in Cambodia are highly fragmented between lowland central plains and peripheral uplands, which has yielded problematic results. Finally, the attempts by the government to address the ensuing contradictions are analysed.